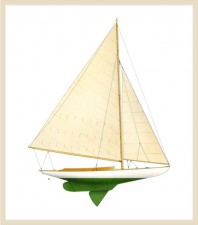 The first 11 boats of the Buzzards Bay 15 class were delivered to members of the Beverly Yacht Club in Marion, MA for the summer racing season of 1899. Club members wanted a better way to conduct regattas than using a handicapping system and asked Nat Herreshoff to design a boat that could be raced as a fleet. The Buzzards Bay 15 was the second of the Herreshoff one-designs, and became quite popular in the early part of the 20th century. They were known as the E-Class at the Beverly Yacht Club, and 91 boats were built by the Herreshoff Manufacturing Company between 1899 and 1927.

There were 3 variations of the “15-Footer” built, and all were keel-centerboard sloops with cedar planking
on bent oak frames. The original design, the Buzzards Bay 15, has a 15 foot waterline, 24’6” LOA, a 2’3” draft with the board up, and a gaff rig. The second design, the Newport 15 only varies in its draft, which is 6” deeper. And in 1923, 11 Watch Hill 15’s were delivered to the Watch Hill Yacht Club. These boats were marconi rigged, drew 2’3”, and had a few minor modifications to the trim and freeboard. Additionally, there were a few special boats built with full keels.

The hull was designed under the Length and Sail Area Rule, which tended to produce graceful, narrow hulls with long overhangs. When heeled over, the waterline length increases, and the boat picks up speed. However, the long overhangs built with the light Herreshoff scantlings were somewhat fragile, and cracked ribs and keels were not uncommon.

Partially as a result of this fragility, the number of boats still in existence is small. Of the 91 originally built, 32 are currently known to exist. Bill Beardsley, a Herreshoff owner and E-Class enthusiast from Marion, MA has been following the design for years and believes there might not be any others left to discover. Of these 32, only 20 are still sailing. The others are either in museums or are awaiting restoration.

These boats are thrilling sailors. They are fast, stiff, and responsive. The hull is slippery, and even at speed such little turbulence is created that the boat leaves virtually no wake. Even at 100+ years old, a 15-footer can give a modern go-fast machine a run for its money.

Read our article “The Herreshoff 15 is Alive and Well…”