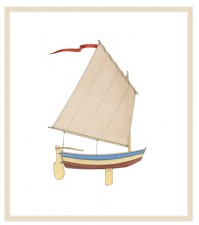 Before the advent of fiberglass dinghies and inflatables, the pram was the most popular form of yacht tender, and with good reason. For a given overall length, often dictated by the available deck space on the yacht, a pram provides the best carrying capacity for a given length.

The type originated in Norway, and in its older forms was typically of round-bilged, riveted lapstrake construction. Later American prams took advantage of plywood construction to produce a light, cheap, and easy-to-build, more or less disposable boat that was very common around the waterfront for many years. The best of these were great, and the worst bore little relation to their ancestors, in many cases being little more than small scows, with little emotional appeal.

In creating the Nutshell Pram, designer Joel White was aiming for something almost as easy to build as the typical American pram, but with the good looks of its Norwegian ancestors. The Nutshell became an immediate classic, and is widely thought of as the ultimate evolution of the type. With tremendous carrying capacity as befits a yacht tender, the Nutshell is easy to row, even against a steep harbor chop, due to it’s deep, V-shaped “chest”, and stays dry because of her strong sheer. She tows very well, and will be happy trailing on her painter when many other dinghies would have to be brought aboard. She sails just fine, too,  a feature that can be useful when you are anchored a ways from town, or to give the kids something to do on summer evenings while their parents relax in the cockpit.
The size difference between the two versions of the Nutshell is considerable, with all the advantages going to the larger boat, if its size doesn’t make it impractical in a given situation.

These prams are a great accessory to a larger yacht because they add to its looks rather than detracting from them. A Nutshell pram on stern davits is a completely different thing than an inflatable on the same davits. If you’re tired of ugly, wet dinghies that neither row, tow, nor sail, consider a Nutshell Pram.

Click here to see photos of Nutshell Prams we have built.