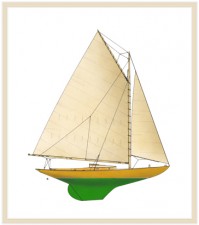 Winter Harbor, Maine is just east of Mt. Desert Island, and was about the easternmost of the well-to-do summer communities that typically commissioned designs for One Design classes. Just outside the harbor is Frenchman’s Bay, notorious for its afternoon chop and largely exposed to the open ocean. To the east is a long stretch of exposed coast.  These are the typically tough local conditions for which the Winter Harbor 21 was designed.

The class has the classic knockabout form, with long ends, gaff rig, and rounded cabin front, but she has considerably more freeboard than the norm, more displacement, and generally just greater volume and buoyancy. As such she is much more of a rough water boat than most of the boats on our site, designed to keep her crew drier, safer, and more comfortable than most club racers.

In some ways her form foreshadows later cruising boats, designed when offshore racing in small boats became popular, and of the boats on this site she is among those with the best cruising potential, for there is enough room in her to achieve a degree of comfort, and she is able enough to get you home almost no matter what. She also has a more dramatic sheer and a “tougher” look than many similar boats, and we think she is something pretty special.

The class is still actively raced at Winter Harbor.