The year 2022 marks the 20th anniversary of Artisan Boatworks and we couldn’t be more proud. What started with just two of us in a 1,000 sq. ft. shop building, working on one boat at a time, has blossomed into a robust crew of fifteen, with 15,000 sq. ft. of covered space and 80 wooden boats in our care. The milestones are too numerous to count, but some highlights include 23 new builds (15 of them Herreshoffs), over 30 major rebuilds, 12 magazine covers, a thriving brokerage business, and two teenage daughters. 2022 also marks 15 years of marriage to my incredible wife Erin, without whom none of this would have been possible. Where does the time go? 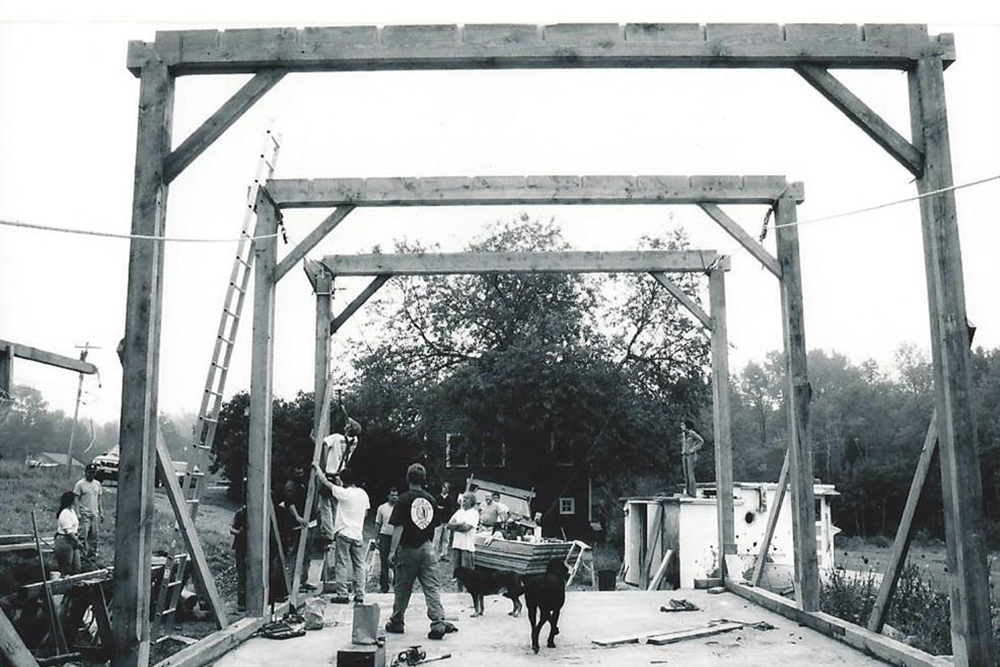 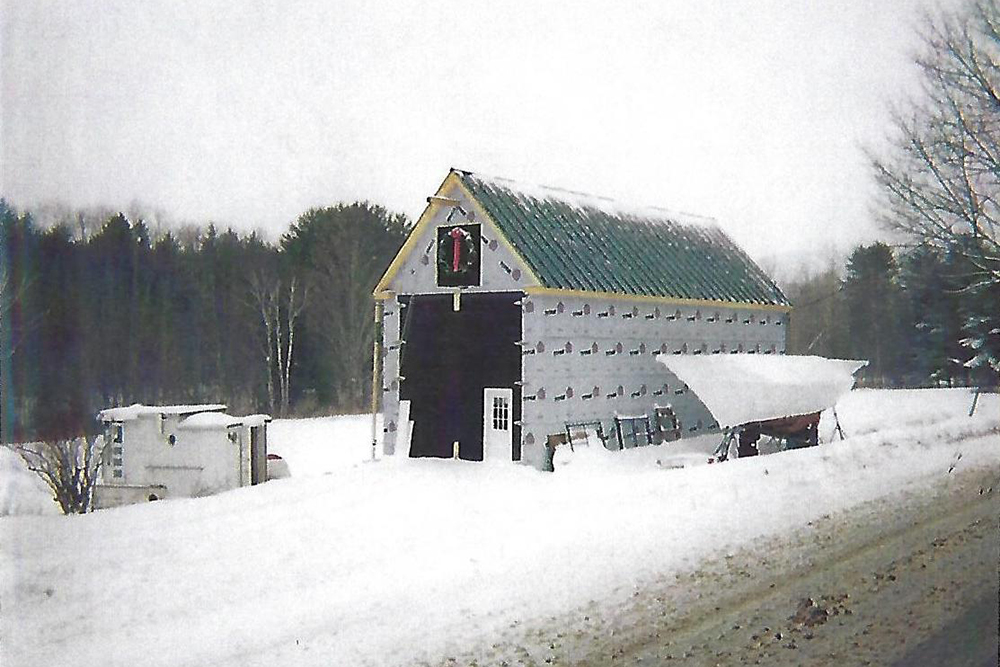 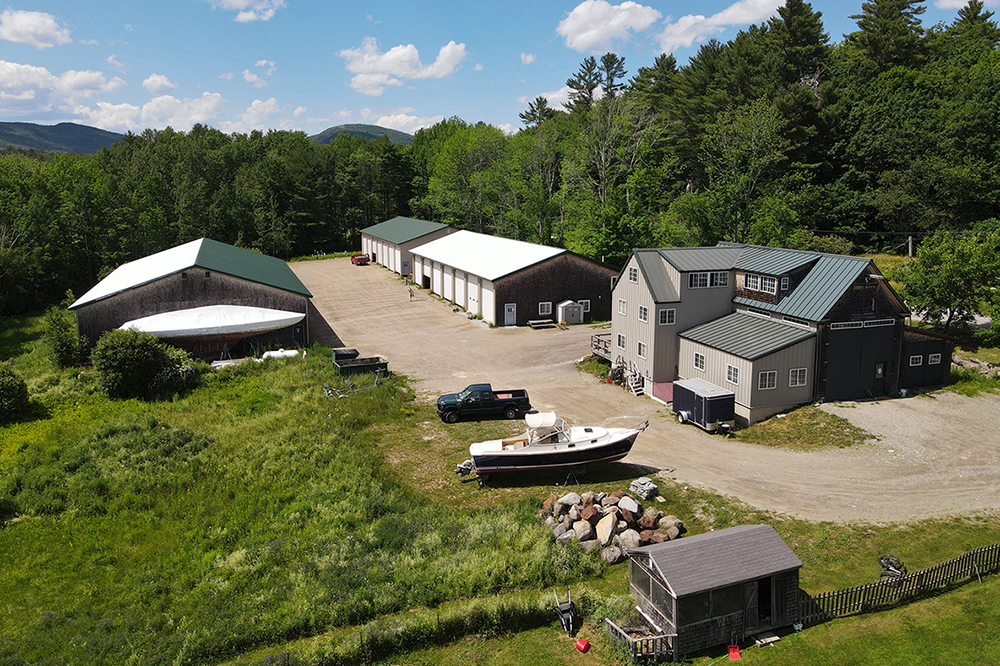 As we look back on 2022 it was our busiest year ever – made possible by an awesome crew and reliable vendors, so that boats continue to roll out the door on schedule.

Spring saw the completion of three major projects that were begun in 2021: GRAMPUS, the 26′ open launch, built by J. O. Brown in 1927, was returned to North Haven in July and will be featured in an upcoming article in Maine Boats, Homes, and Harbors magazine. KAZE, the 30′ Clinton Crane-designed IDEM scow sloop, was returned to her home on Upper St. Regis Lake in the Adirondacks a few days later. She immediately started winning races for the first time in many years. GRAMPUS and KAZE have returned this winter for storage and annual maintenance, and KAZE will be getting new cockpit coamings and covering boards.

ALERION, the first boat of the full-keel 26′ class built by Halsey Herreshoff in the 1970s, received a full restoration and a new mast last winter. She has yet to be launched, but was rigged in the yard, and is first in line for this coming spring.

For a more about the backgrounds of these recently completed projects, please revisit our 2021 newsletter at www.ArtisanBoatworks.com. 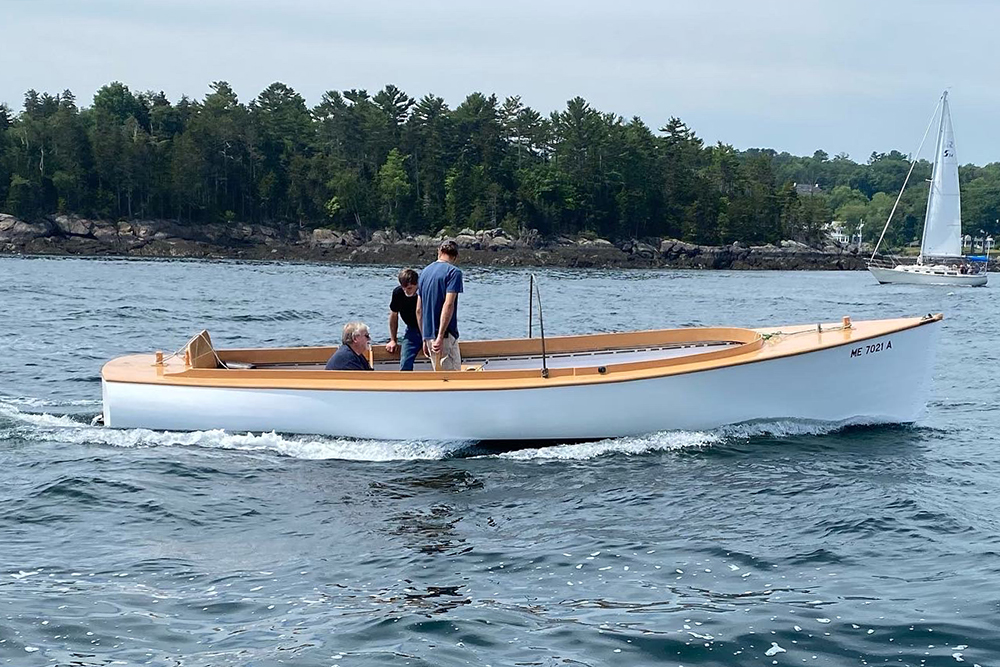 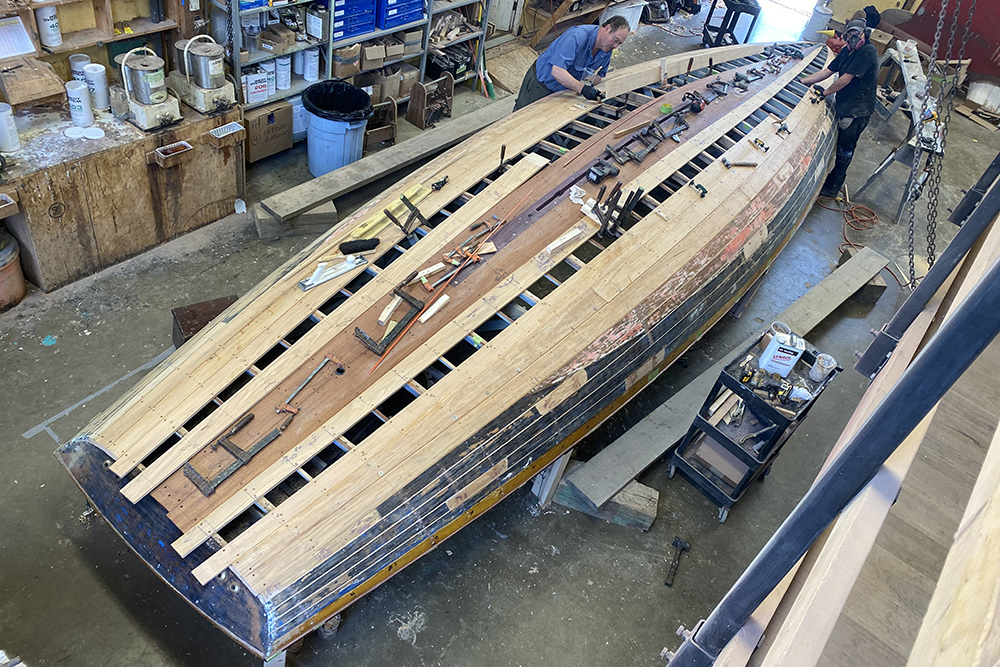 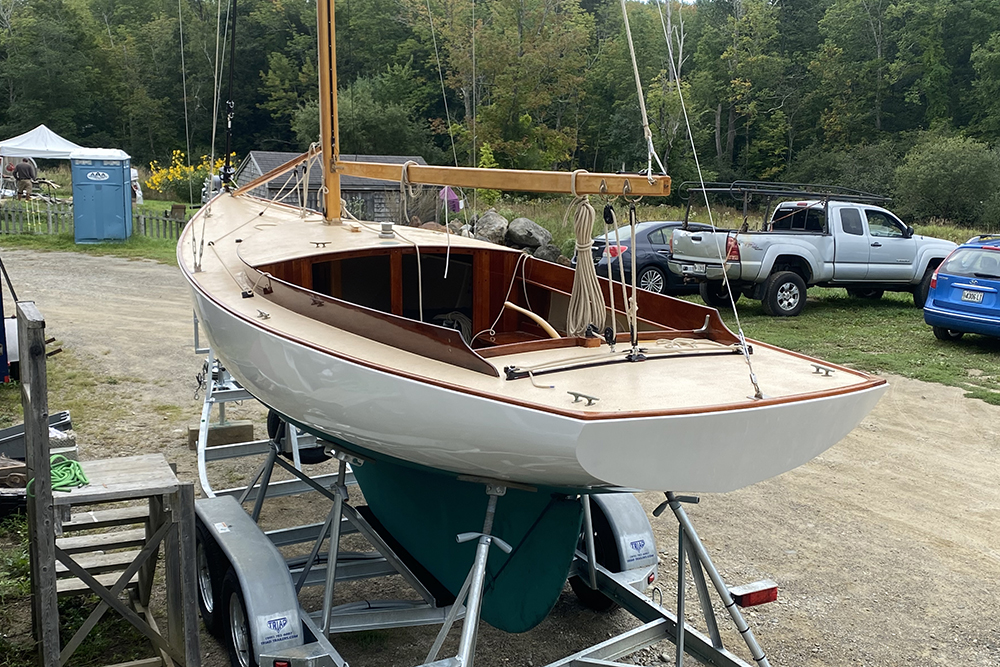 Projects for this winter started lining up in July with the arrival of MELITA, a 40′ Sparkman & Stephens-designed sloop of 1949 (S&S design #849). Known as the Trumpy One-Design and intended to compete with the popular 40′ Owens Cutter of that era, John Trumpy Jr. (of John Trumpy & Sons in Annapolis, MD) built the boat, originally named SEA CALL IV, in 1951 for his own use and to serve as a prototype for the class.  But the Trumpy One-Design idea never caught on and no others were built there.

Under subsequent owners, SEA CALL became LYRA, STARSALL, and finally, MELITA. The boat had been out of the water for about six years when the current owner purchased her last summer.

Since the boat had already been given a new deck and toe rails by Benjamin River Marine in the early 2000s, our work began with Jerry and Kale replacing the cockpit footwell and sheathing the cabin sides with ¼”-thick Honduras mahogany veneers. Both areas had deteriorated and been painted. Now they will be varnished again! Sprout replaced the original canvas cabintop sheathing with two layers of 10 oz fiberglass cloth set in epoxy, and constructed new seat tops for the cockpit lockers.

One of the interesting aspects of this project has been reconciling what Sparkman & Stephens drew with what Trumpy actually built. Although we were not able to obtain drawings from the current owners of Sparkman & Stephens, thankfully, we were able to get a full set from a previous owner’s family. Some of the most interesting discrepancies were the cockpit footwell layout, the eyebrow molding and trim dimensions, and the shape of the portlights in the cabin sides. These are the subtle details that give a boat her character, and in all instances, we opted to honor the original Sparkman & Stephens design rather than stay with what Trumpy had built. Access to drawings is crucial if changes have been made, and if one chooses to honor what the designers depicted, and we are grateful to the museums and private collectors for preserving these drawings and for making them available to owners and restorers at a reasonable cost.

All nine of MELITA’s elliptical fixed portlights were replaced with opening rectangular ones from Spartan Marine, and eight new self-tailing bronze winches from Wilmex will adorn their original pedestals. This winter, Alex will be replacing her engine with a new 38 hp Beta diesel. Her sternpost will also be replaced, the ballast keel and deadwood re-bedded, and the brightwork completely stripped and refinished. The standing and running rigging will be entirely replaced, and a new suit of Sperry Sails will be bent on in the spring.

We will also be addressing the painted waterline by lowering the boot top, making its lower edge parallel to the water, and increasing its width at both ends to give it a slight sheer. We feel that such details really matter, and that it takes an experienced eye to get them right.

MELITA’s new owner will be renaming the boat CELIA, and she will be returning to Castine which has long been her home port. Keep an eye out for CELIA at Camden Classics and the Eggemoggin Reach Regatta this coming summer, where she is certain to look good and do well. 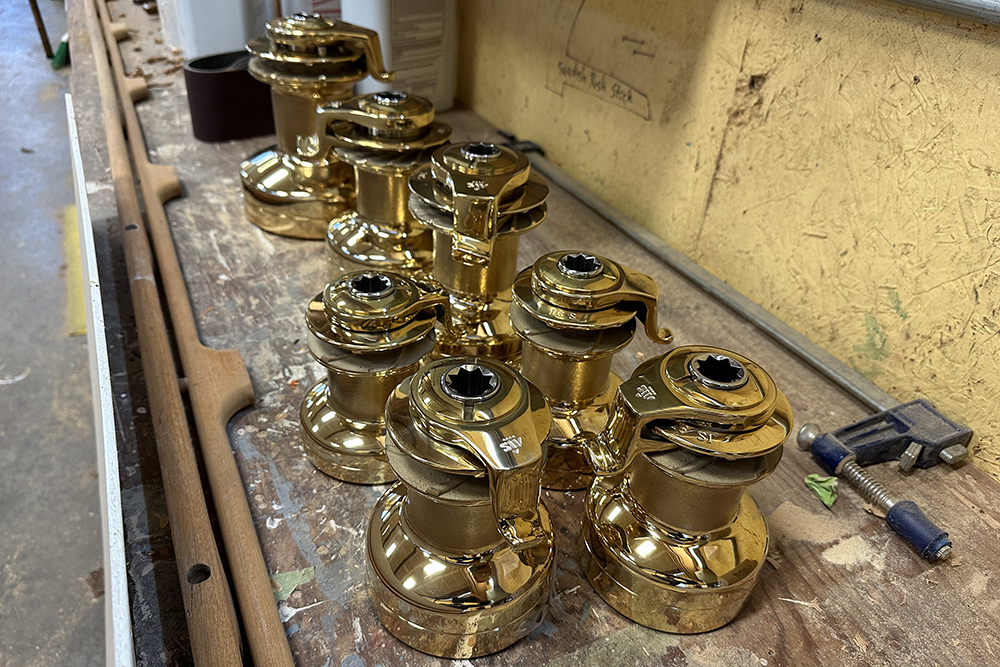 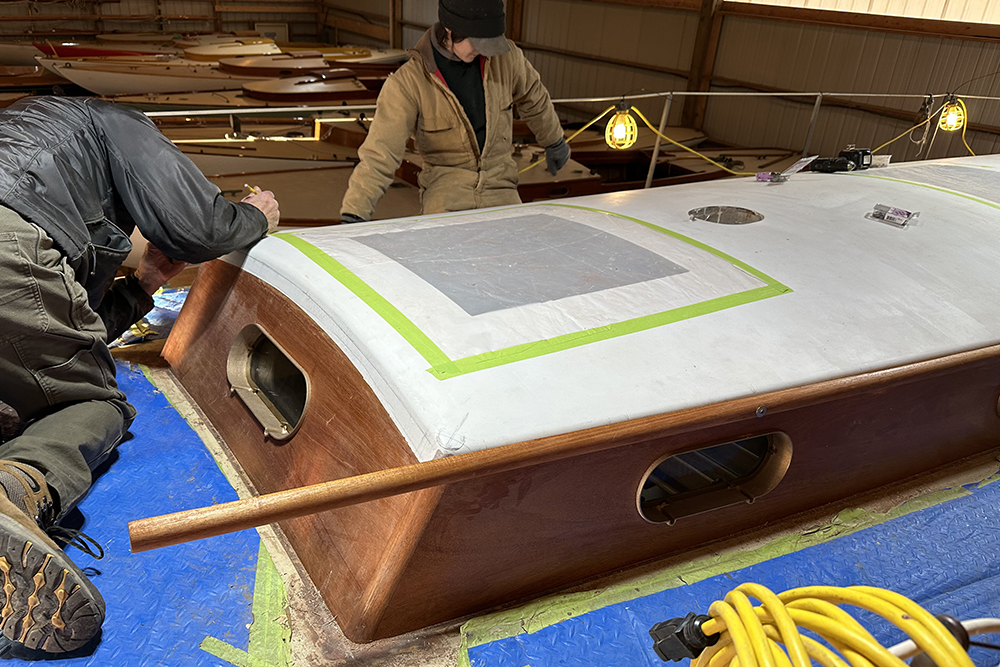 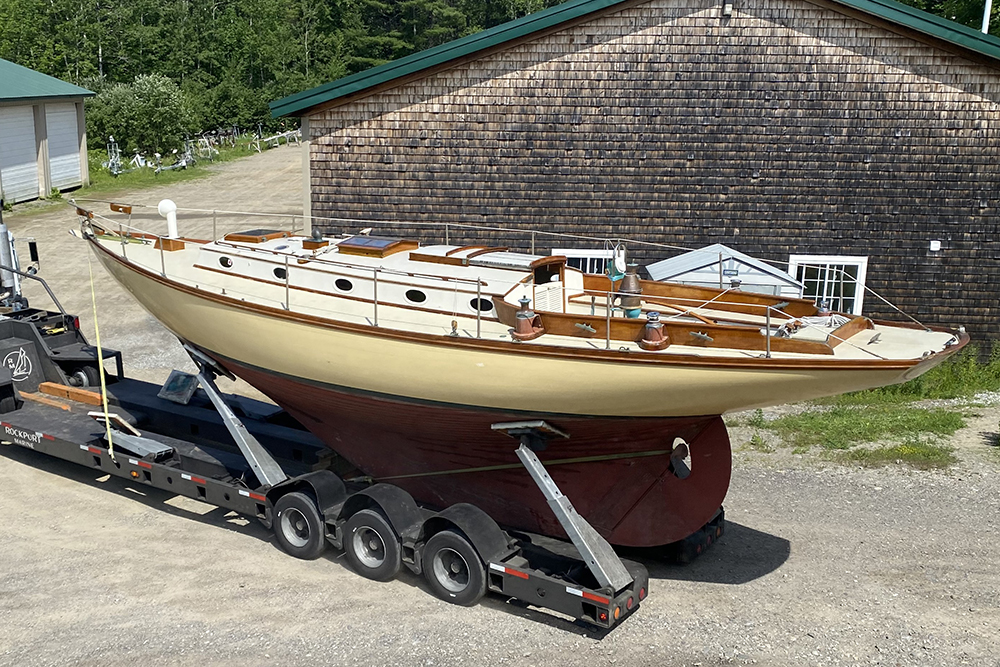 Also arriving in July was SECRET, a Concordia 31 sloop designed by W.B. Harris and Waldo Howland in 1938, and built by the Concordia Company in 1967. There was a fire aboard SECRET in 1988, resulting in new deck, cockpit, and trunk cabin. Her oak backbone timbers, however, were original and iron fastened. Although the wood appeared sound on the outside, iron sickness was extensive – particularly in the frame ends where floor timber bolts passed through.

Often, we find ourselves in the difficult position of having to share bad news with owners. But this owner was already aware that she needed a whole new backbone and brought her to Artisan Boatworks because our shop is right down the street from his home in Hope.

Doing structural work traditionally on boat this size is a real treat, and it’s wonderful to be working with sweet-smelling oak and cedar, bronze fasteners, and Dolphinite bedding compound—a spreadable substance rivaled only by Nutella. Some beautiful 6″ thick oak slabs were procured from Duke Besozzi down at New England Naval Timbers in Cornwall, CT, and Mike and Logan are using them this month to shape and assemble the new stem, keel, sternpost, and deadwood. All of SECRET’S floor timbers are being replaced, as well as her frame ends which are being scarfed onto the originals with G-flex epoxy. The new fasteners are bronze, and everything is being thoroughly painted – which should ensure that SECRET lives on for another 60-80 years and provides her owner with great sailing and the satisfaction of knowing he did right by a good boat.

SECRET’s owner stops by the yard once or twice a week to admire Mike and Logan’s work – having been trained by them to bring doughnuts or other such incentives. His enthusiasm and appreciation of the work make these visits, and the project as a whole, a genuine pleasure.. 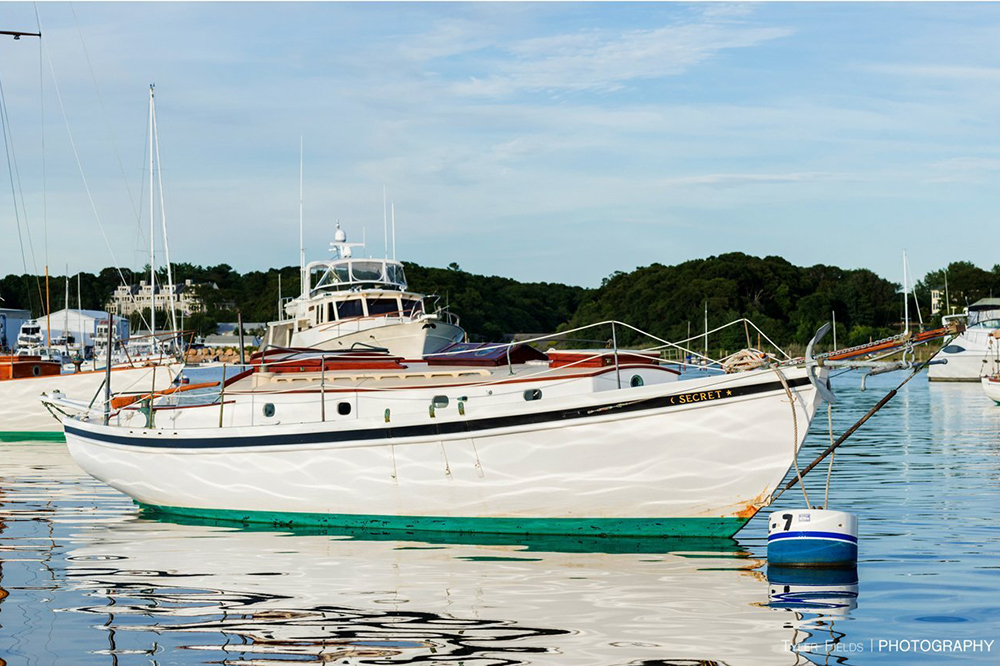 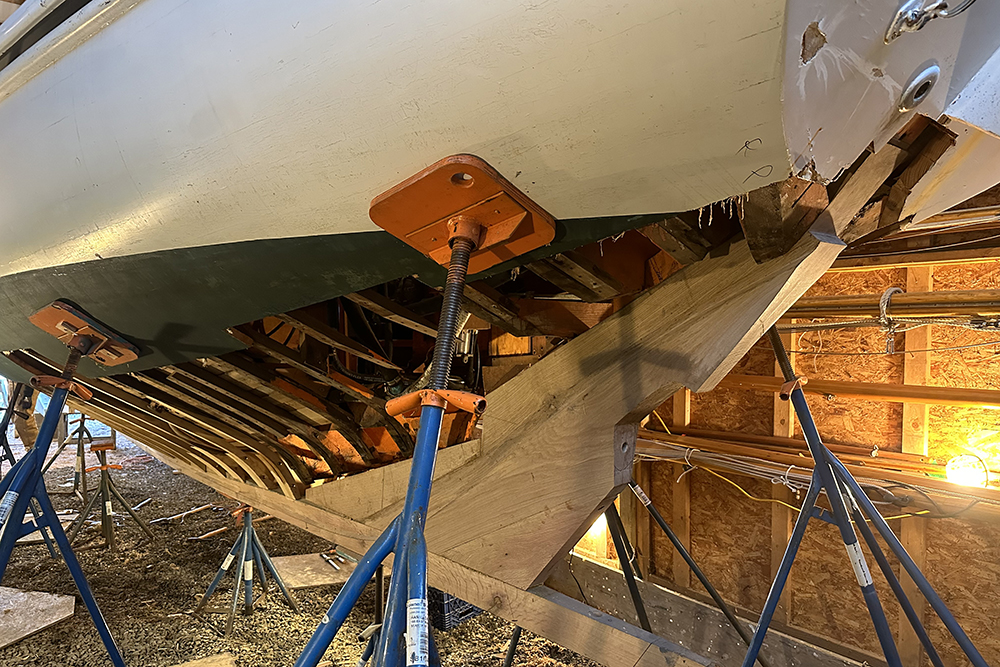 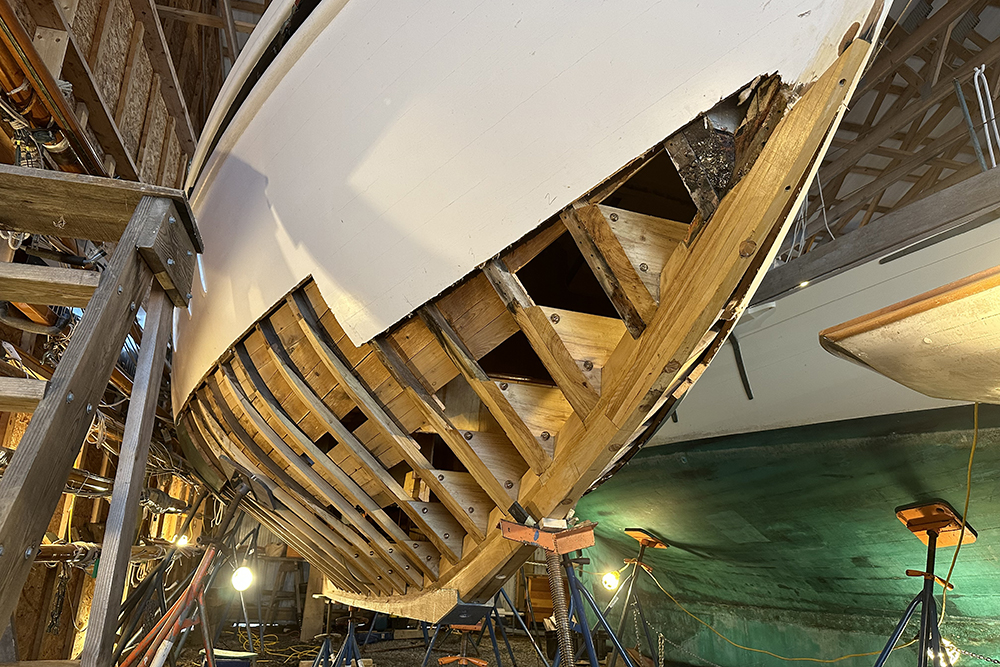 We love building spars, and big solid ones are the best! Our friends down at Bristol Marine at Boothbay Harbor were finishing up the multi-year restoration of the 112′ Gloucester fishing schooner ERNESTINA-MORRISSEY in September and asked if we could build the main and fore topmasts. Each spar was 12″ in diameter and they measured 41′ and 26′ long respectively. Garrett and Jasper built them from laminations of old-growth Douglas-fir and delivered them to Boothbay on October 20, just in time for vessel’s departure for her new home at Massachusetts Maritime Academy. 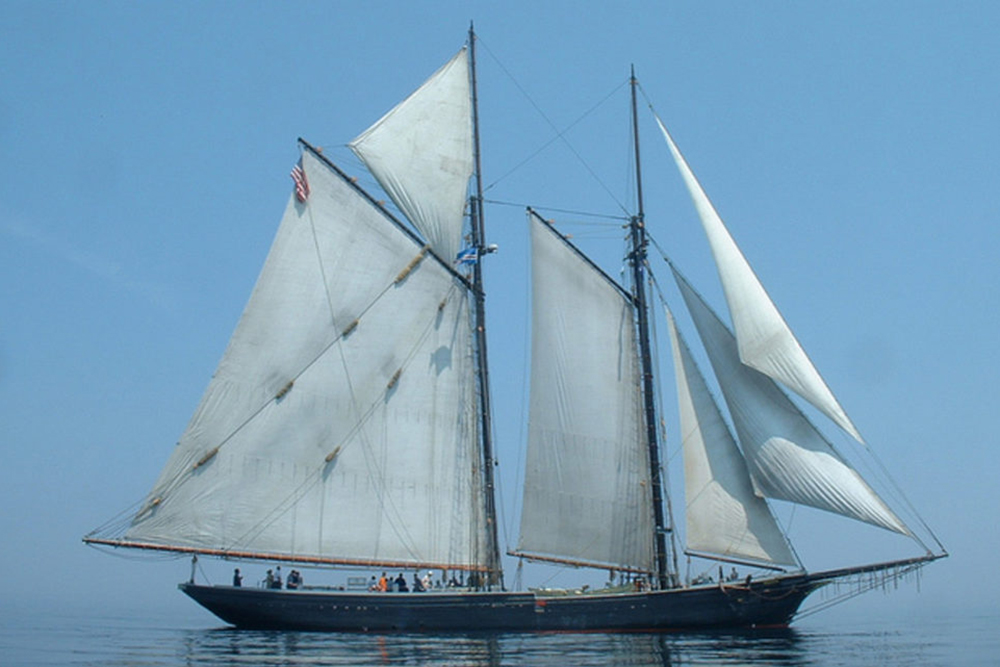 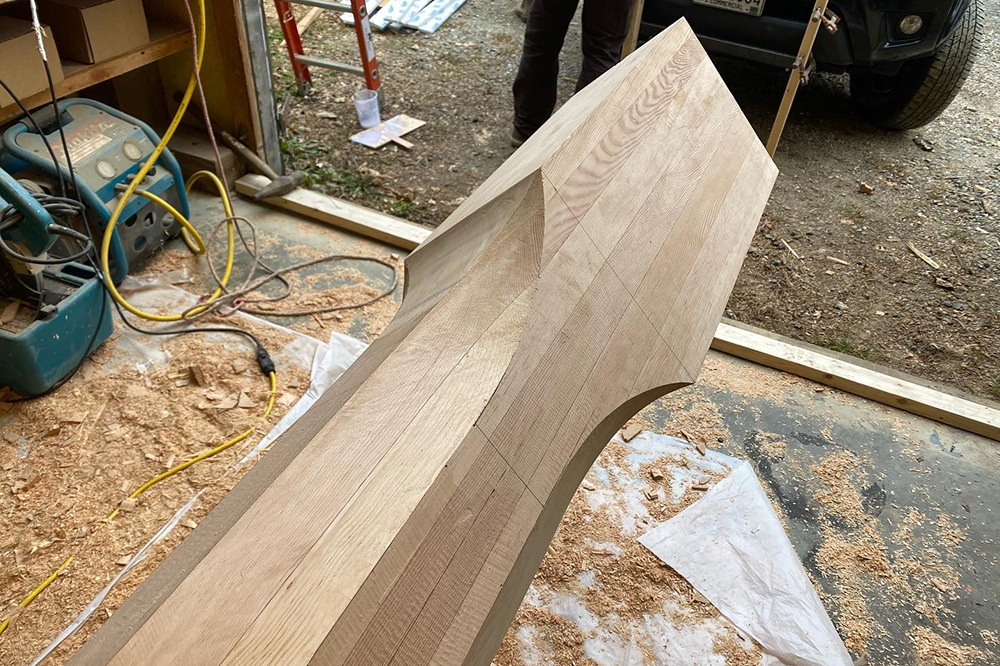 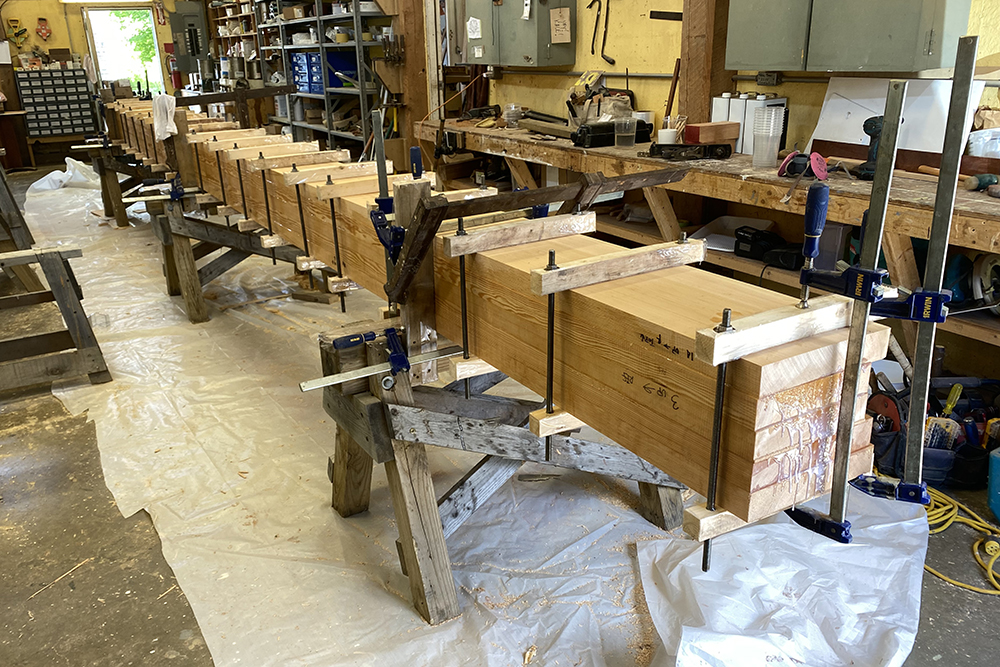 Jeff is heading up our current new build, with Jerry, Jasper, and Kale also on the project. HA’ PENNY is a 20′ miniature offshore cruiser designed by Tom MacNaughton for an experienced sailor who has a dream as pure as the vessel is distinctive. In the design brief, HA’ PENNY is described as “a voyaging yacht, sized to be a minimum long-term liveaboard, on which one person can live a simple life. She could also be a minimum voyaging yacht for two people.”

There is no engine, no through-hulls, and the self-steering sail plan is an unstayed junk rig with a carbon fiber mast. Both the hull and deck are cedar strip planked, with 10 ounce unidirectional cloth/epoxy sheathing inside and out. Centerline structure is laminated fir; ballast is external lead; and all mechanical fasteners are bronze. Cruising speed is 4.5 knots, and careful consideration has been given to ample storage of food and water for up to 60 days at sea.

HA’ PENNY is all business on the outside, but her interior will be fitted out in the finest yacht fashion. Launching and sea-trials will be this spring. 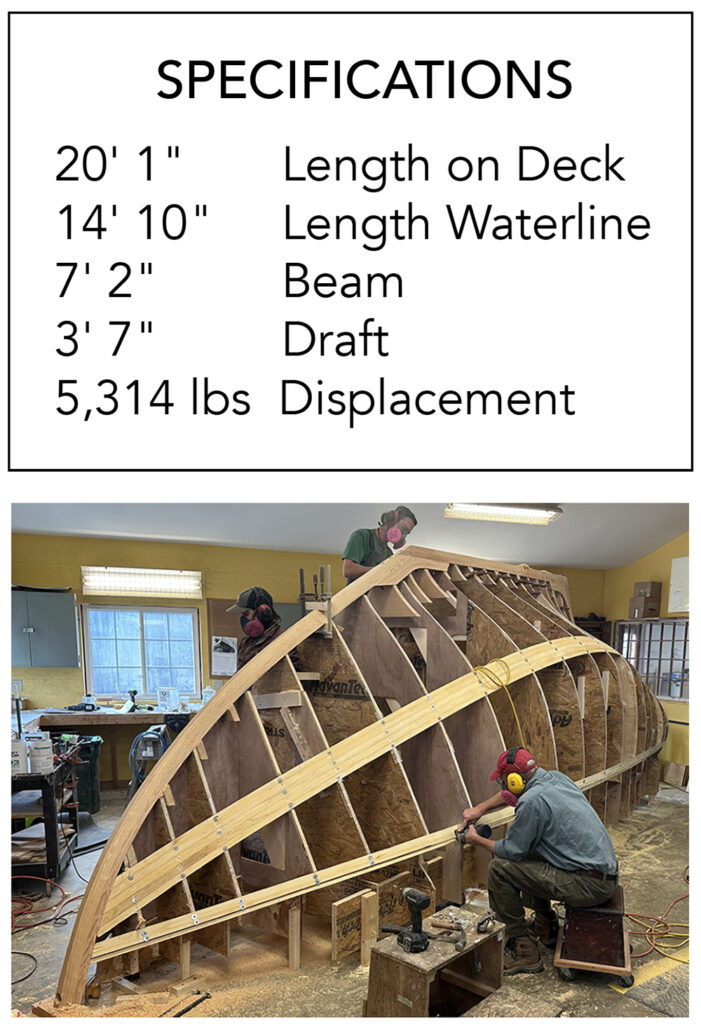 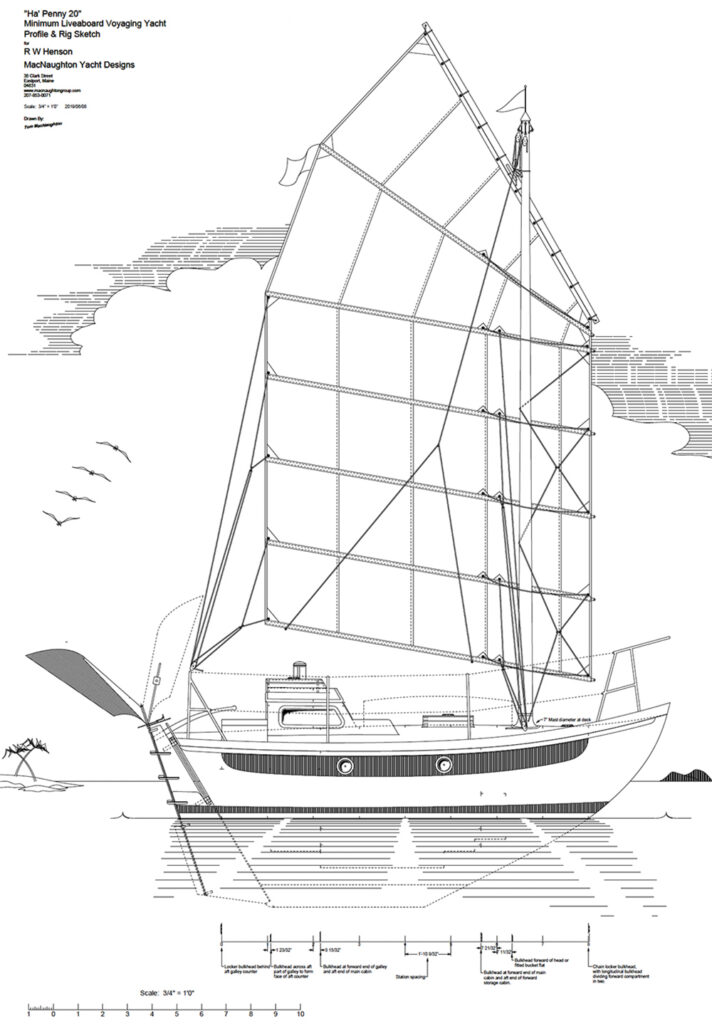 Much of our 2023/24 schedule has already been booked, but there’s still some space available, so here are two projects that we’d love to see happen:

VEGA is one of the 28’6″ Alden Triangle-class sloops, believed to be #7 of the original Marblehead fleet. She once belonged to the grandfather of the well-known surveyor Paul Haley. VEGA has had all new frames and floor timbers installed already, along with a new deck and trunk cabin.  What’s remaining are the seats and floorboards, rig, and paint/varnish. That’ll be a bigger job than it sounds, but at her current state, she’s a great starting point. There is a donor Triangle available with a salvageable mast and hardware. VEGA can be yours for free providing the remaining work is done here at Artisan Boatworks. 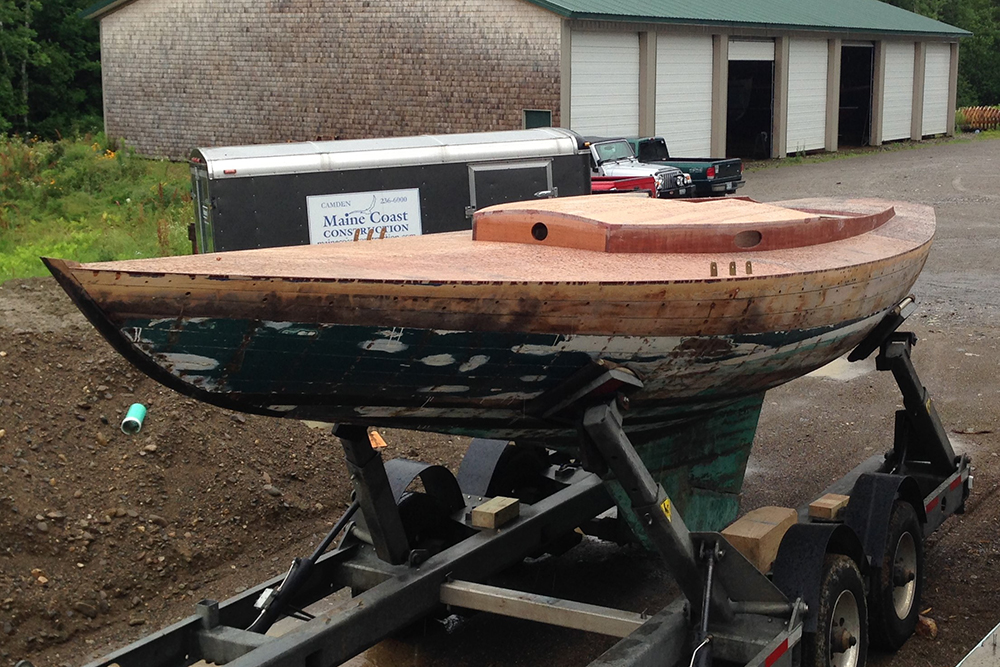 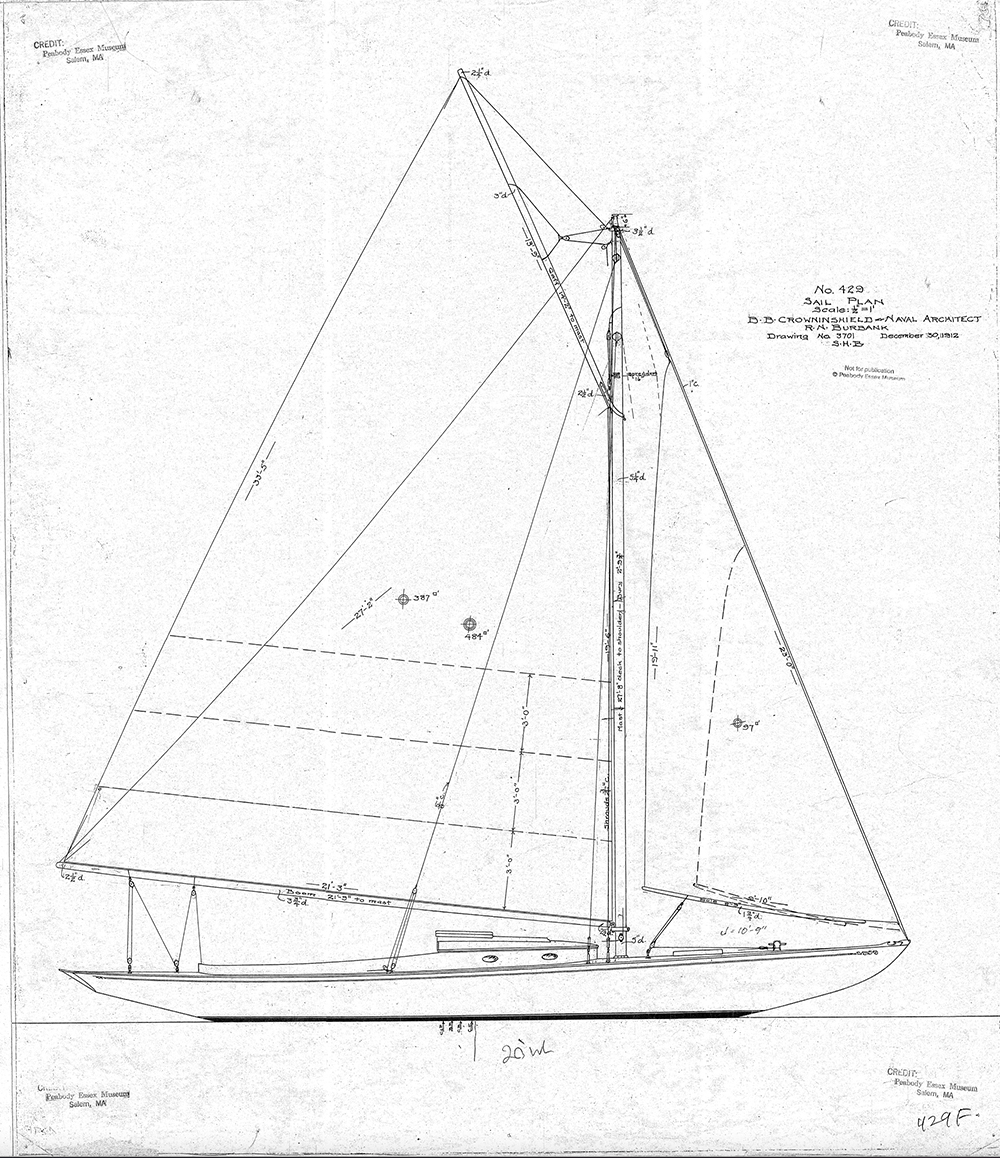 Another project we’re dying to sink our teeth into is building a brand-new Crowninshield 20, design #429 of 1912. This 33′ LOA knockabout is a larger version of the venerable Dark Harbor 17 and Camden Class knockabouts, but with room for a wonderfully comfortable cockpit, a small diesel or electric auxiliary motor, and a cabin that’s large enough for the occasional overnight, or for an afternoon nap. The gaff sail plan is modest and could be easily handled by two. She’d be a great boat for racing in the classic series, and for construction I’d go purely traditional plank-on-frame with bronze fasteners, and I’d loft it by hand on the floor the old-fashioned way.

I’m putting it out there: Let’s build this boat!

In 2022 we welcomed 14 new wooden boats into our service program, including a Concordia Yawl, a Herreshoff Araminta ketch, and a Hinckley Pilot, to name a few. Pete, Sprout, Mark, Cathal, and Carryton are hard at work cycling these and other boats through the paint bays in preparation for next spring, and Service Foreman Tony Buendo is doing an amazing job of scheduling boats in and out, keeping track of all the repairs and upgrades, and ensuring that owners remain abreast of progress. As one of our favorite clients recently reminded me, regardless of how busy with work, “everyone always takes a call from the boatyard! 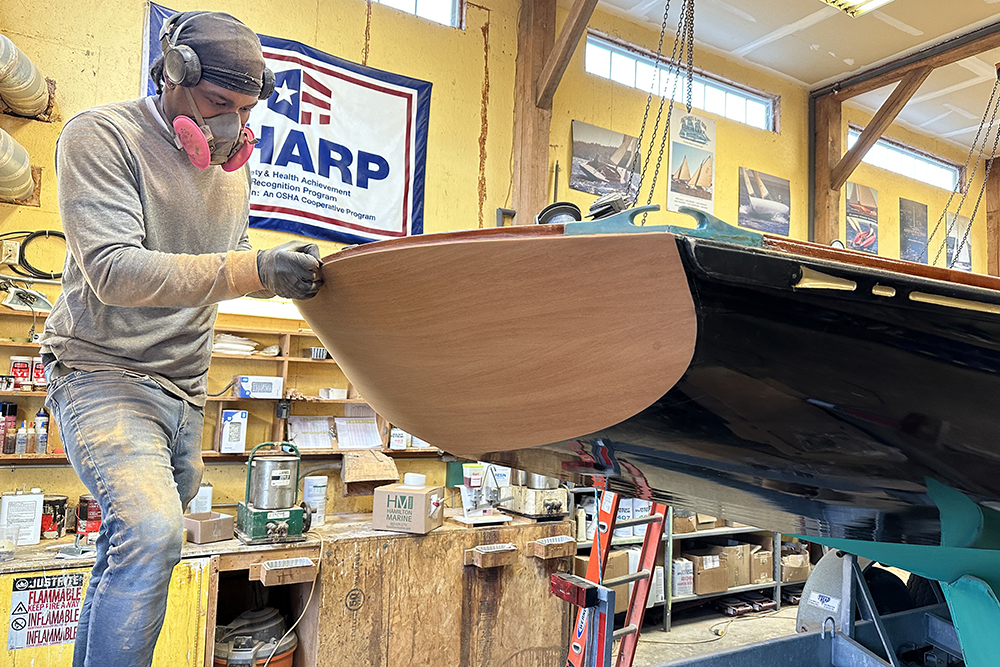 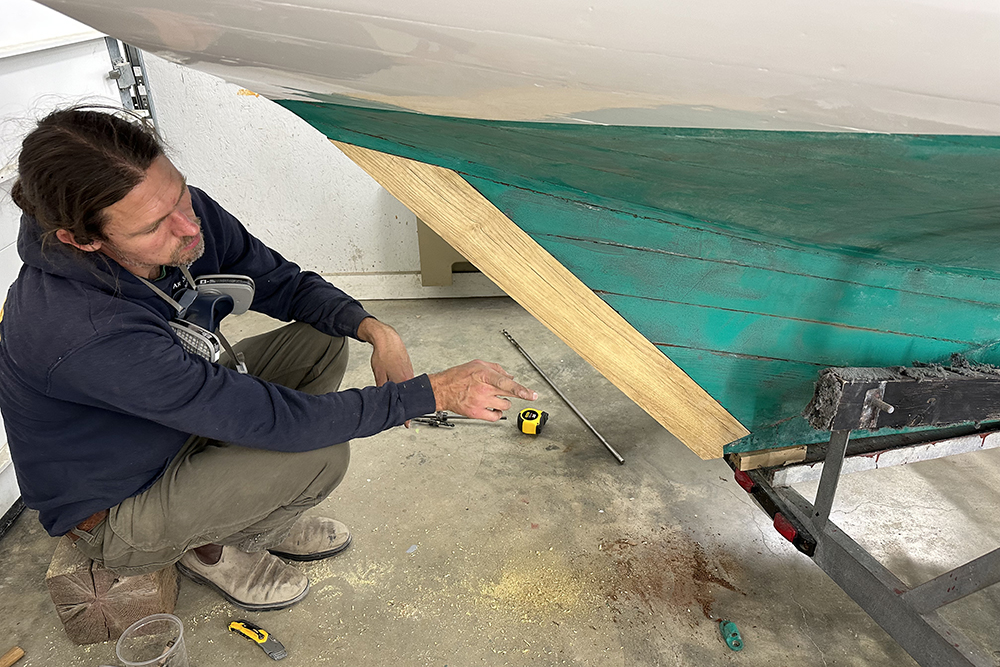 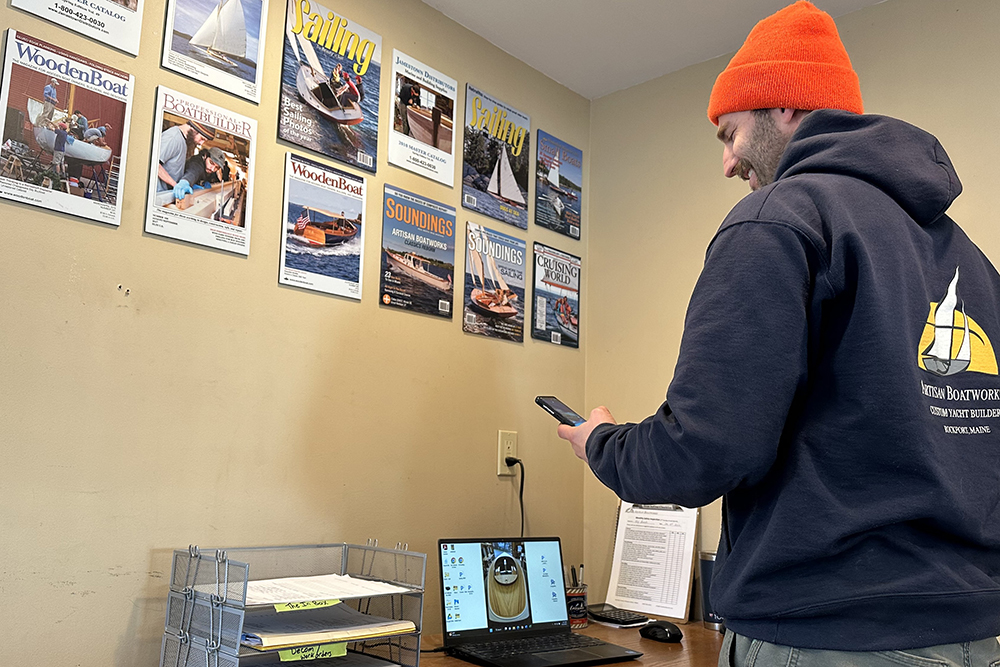 Here are our current brokerage listings. You can view more details on these boats here on our brokerage pages. 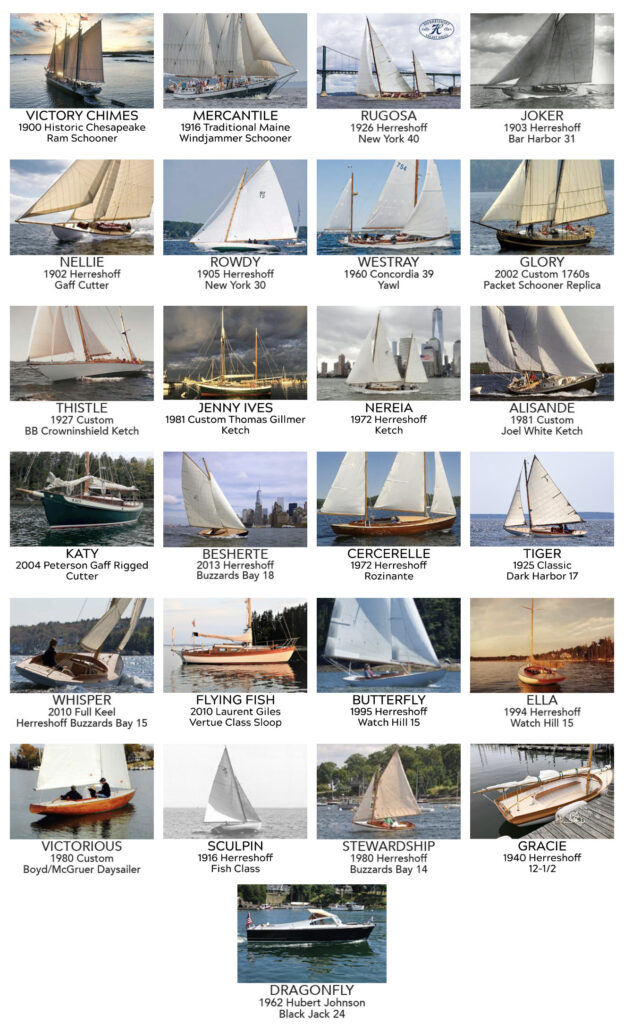 Congratulations to the new owners who purchased boats through our brokerage in 2022! We are selectively accepting new listings and are happy to represent prospective buyers who are beginning a search for a boat of their own. For help finding a classic boat or to list your current boat for sale, you can reach Alec directly at (207) 542-0372 or email him at Alec@ArtisanBoatworks.com. 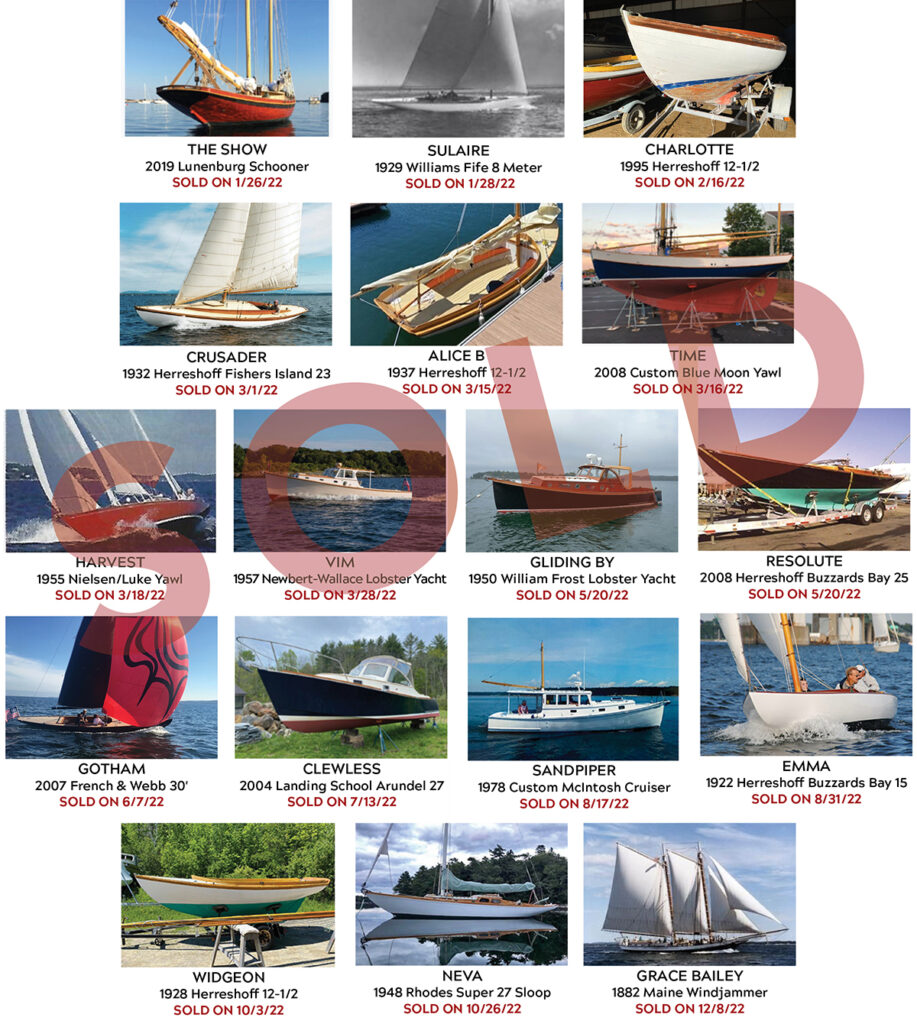