MADDY SUE, originally named TRAILAWAY , was built by Chester Clement of Southwest Harbor, Maine, originally for Cranberry Island fisherman, Francis Spurling.  She was later bought by a summer family on the island and pleasure sailed for many years.  In 2012 her current owner, who has a passion for saving classic boats, had an extensive rebuild by the George Darling Boatworks in Burlington, Vermont, adding a rebuilt Chris Craft marine engine.  She is a beautiful example of what yachting is all about and is in terrific condition to sail in 2018! 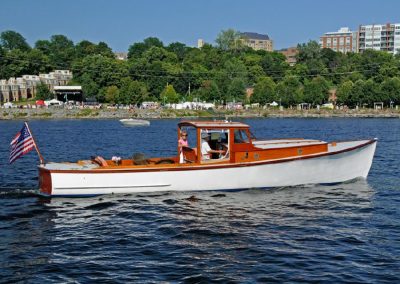 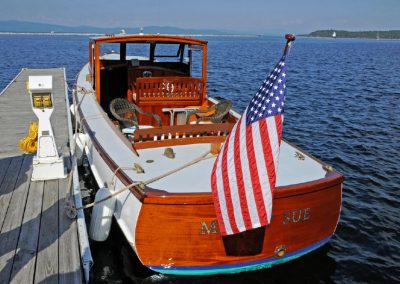 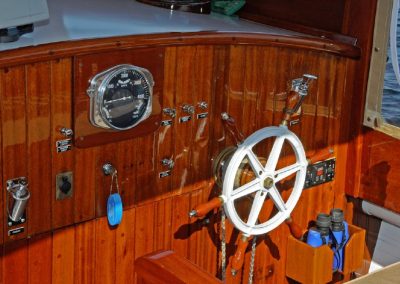 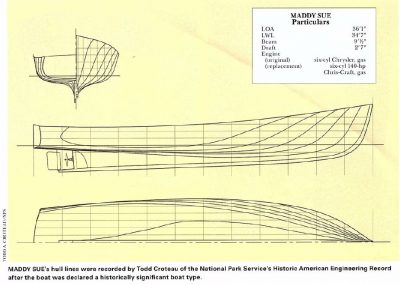 Construction
This boat was built by Chester Clement of Southwest Harbor, Maine, in 1932 for Francis Spurling of Great Cranberry Island as a work boat.  She had the customary canvas peaked cabin and exposed helm of the times.  About ten years later, he added her mahogany trunk cabin and sheltered helm. He used her for fishing and lobstering, but summers he would clean her up and take out charters. She was built with cedar planking over 2″ x 1 1/4″ steam-bent oak frames, 10″ on center. Oak keel, stern & floor timbers and deck framing. In a 2012-13 refit at the Darling Boatworks in Charlotte, Vermont, the following work was done:  reframed, refastened, and replanked the hull where needed, and replaced the transom with epoxied plywood and a varnished mahogany veneer.  Below the waterline, silicon bronze screws were used and topsides her original Swedish galvanized clenched nails were cleaned and epoxied, as they were impossible to pull. Rebuilt the cockpit sole, decks, and cabintop with glass over plywood. New engine bedlogs and shaft bearings. As much of the original mahogany windshield and cabin was saved and new mahogany was added and stained to blend with the old. Much of the old bronze hardware and instrument panel was saved and reused as well.  New mahogany helm and stern benches were added.