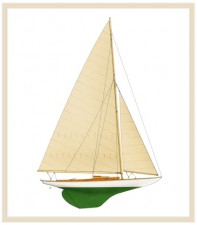 The Triangle class has the true knockabout racer form shown in many of the designs on this site, but she has the distinction of being from the board of John Alden, who will always be famous for his aesthetically superb boats, which during that happy period in American yacht design were also among the most successful racing boats. The Triangle is certainly a good illustration of those facts.

Similar in all respects to a Dark Harbor 17 ½, shown elsewhere on this site, she has 1,600 lbs more displacement, making her 32 per cent larger, even though she is only two and a half feet longer. Thus she is a considerably fuller, huskier boat, with considerably more room in her (at proportionally higher cost, of course).

As such she has a bit more cruising capability and rough water ability along with her excellent speed, handling, and appearance.

Unlike some of the other knockabouts we show, the Triangle was designed with a Marconi rig. In this early form it consists of a large, relatively low aspect ratio main, with a small, non-overlapping jib. While this rig looks antiquated to us today, it has some very good points. One of these is that the jib’s small size makes it especially easy to handle, and it is typically self tending, leaving only the running backstays to tend when tacking. Also, having a high proportion of the sail area in the main makes the rig very efficient off the wind and in light air, just as the gaff sails were. Given that it is slightly better to windward than the gaff rig, it is nothing to sneeze at.